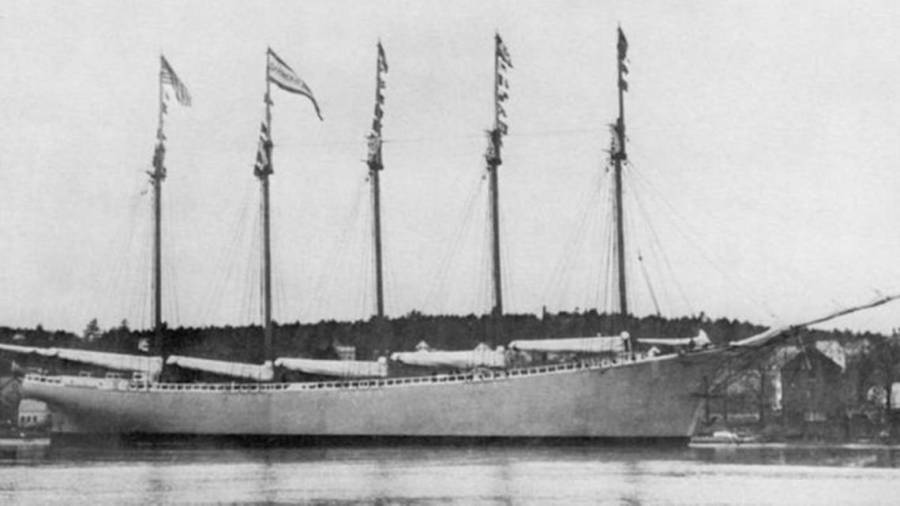 31st January 2021 marked one-hundred-years of the ghost ship mystery of the Outer Banks in North Carolina. It is an area known for shipwrecks due to rough currents and shifting shoals, but this one in particular has caught the intrigue and imagination of countless people.

When the Carroll A Deering left Rio De Jarnerio in early January 1921, its crew was comprised of ten men, including Captain W. B. Wormell, and one cat. The 1,879-ton, five-mast schooner was returning to its home port in Virginia after successfully delivering it’s cargo of coal.

The Carroll A Deering was next seen on 29th January, the was spotted by a lightship keeper named Captain Jacobson. An unknown member of the crew hailed Jacobson and informed him the ship had lost her anchors. Due to a radio failure, Jacobson was unable to report this loss straight away. Something he noted as strange was the other members of the ship’s crew were “milling around” (Graveyard of the Atlantic Museum) aimlessly on the deck.

The next time the Carroll A Deering was seen was two days later on 31st January, she was run aground on the Diamond Shoals. Due to rough weather, they were unable to physically reach the ship until a few days later on 4th February. Historian James Charlet wrote of what they could see: “she had been driven high up on the shoals, which would have taken a massive force to accomplish” (Graveyard of the Atlantic Museum) which begs the question how did they manage to get her there, but also why? Charlet continues “Further details that might have a bearing on the mystery were that red light distress signals had been sent up the mast” (Graveyard of the Atlantic Museum). Both of the ships rescue boats were missing, the ropes which would have held them hung slack, and “They could see no movements onboard” (Graveyard of the Atlantic Museum).

When the waves were calm enough for the ship to be reached, they confirmed she was indeed abandoned save for the cat, which they brought back to shore. The personal belongings of the crew were missing, along with various navigation equipment and important paperwork. If that wasn’t eerie enough: “Captain Wormell’s handwritten log entries on the ship’s map was replaced with another hand after January 23.” Was the handwriting that of another crewmember because the captain had become incapacitated? Or was it that of an outsider who was the cause of the missing crew? We can only speculate.

Roughly a month after the ship was discovered on the shoals, it was dynamited as she was becoming unsafe and posed a danger to other vessels in the area, but not before any items of value or interest were removed. There is a permanent display at Graveyard of the Atlantic Museum which includes the captain’s desk, a bell, an oil lamp. Part of the timber has even been used in the construction of the gift shop. Other items are also in the homes of various local peoples.

No trace of the crew has ever been found, we don’t know when they left the ship or why. The FBI and other agencies have investigated the disappearance but have never been able to determine anything. There have been many theories posited over the years, including but not limited to: the Bermuda triangle, mutiny, pirates, or rum runners.

What do you think happened to the crew?

All of my content is free and available to everyone, if you would like to support me and my caffeine addiction which makes this all possible, there is a link below! Thank you :D